“He that hideth hatred with lying lips, and he that uttereth a slander, is a fool.”

In this proverb of Solomon (10:1), he joins together two actions related to the tongue which at first blush appear to be opposites, and yet paradoxically, the two actions produce the same outcome!  Let’s look more closely. 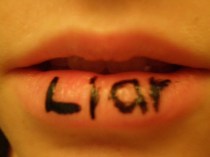 In the first instance, he draws to our attention the one who “hideth hatred with lying lips.”  In other words, his lips are moving, but the words pouring forth from his mouth conceal the hatred and loathing in the heart.

Perhaps you’ve caught yourself exchanging Monday-morning pleasantries with a co-worker, chatting harmlessly about the activities of the recent weekend… on the outside you present the image of the nicest guy in the office, but on the inside, you hate the co-worker’s guts!  You are speaking, but your speech is not consistent with your heart.

In the second instance, he speaks of a different sort of person entirely – one whose mouth spews venomous slander.  To return to the example of Monday morning in the office, this is the co-worker who verbally “runs down” everyone and everything, especially attacking the actions and motivations of others, casting others into a negative light.

The polite person with the hateful heart, and the hateful person gushing poisonous slander – they’re entirely different, right?  No, says Solomon, they are surprisingly similar.  Both are morally deficient – fools, in fact.

THE POINT OF THE PROVERB

Listen up, because this is key.  The “jab” of this proverb lies in the first half.  It speaks to those of us who have been trained to “be polite,” when our outer friendliness is a mask of hypocrisy.  Jesus reserves his harshest condemnation for people who pretend to be something on the outside, but have murder within (and yes, according to Jesus, hatred is the moral equivalent of murder – Matthew 5:21-22).  It is so easy to identify – and condemn – the slanderer.

As a pastor, I can say without question that slander is one of the most destructive sins that can strike a congregation.  But at least with the slanderer, you know what you’ve got. How much more deceptive, subtle, and evil is the Pharisaic hypocrisy of hiding hatred with lying lips.

The proverb calls us to simplicity of speech.  Say what you mean, and mean what you say.  As the Master said, “Let your ‘yes’ be ‘yes,’ and your ‘no,’ ‘no’; anything beyond this comes from the evil one” (Matthew 6:37).  And no, that’s not a free pass to tell people off!  As Jesus-Followers, we “speak the truth in love” to one another (Ephesians 4:15).

Father God, grant us simplicity of speech coming from hearts full of the love of Christ.  Forgive us our sins of the tongue, we ask, for the sake of Thy dear Son, Christ our Lord, in whose Name we pray:  Amen.

Husband, father, and pastor of the Evangelical Presbyterian Church, serving at Lookout Valley Presbyterian Church, Chattanooga TN, since 2002. Grady's life verse is Habakkuk 2:14, "For the earth will be filled with the knowledge of the glory of the LORD, as the waters cover the sea." Amen! END_OF_DOCUMENT_TOKEN_TO_BE_REPLACED
This entry was posted on Tuesday, October 7th, 2014 at 2:03 pm and tagged with Book of Proverbs, hypocrisy, lies, Lying, slander and posted in conversation/speech, Fools, gossip, Truth. You can follow any responses to this entry through the RSS 2.0 feed.
« Grow from Instruction
Be Quiet »