“The light of the righteous rejoiceth: but the lamp of the wicked shall be put out.” 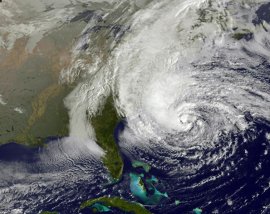 “Superstorm” Sandy was a monster storm that stretched over the entire eastern coast of North America, bringing hurricane winds, torrential rain, 13 ft. storm surges, and even two feet of snow in some places. Over 60 million people suffered its effects, the worst being in the north where states suffered tens of billions of dollars worth of damage. Some people called it a “Frankenstorm.”

There for a while, from Florida to Maine, the sun was hidden by clouds. Rain fell by the gallon as coastal towns were drowned with swelling tides. But amazingly, no matter how hard it rained, no matter how high the waves, it didn’t put out the sun. Go figure.

The difference between the righteous and the wicked is their source of light. As with the sun, the Light of the righteous is far beyond the reach of nature. No storm, no matter how big, can quench its flame. It may be hidden from view at times, but it is always there, and always will be.

The wicked, on the other hand, light their own lamp. In other words, the source of their “light” comes from within, below the storm, subject to both torrent and tempest. It will go out, eventually.

“Who among you fears the LORD? Who obeys the voice of His Servant? Who walks in darkness And has no light? Let him trust in the name of the LORD And rely upon his God. Look, all you who kindle a fire, Who encircle yourselves with sparks: Walk in the light of your fire and in the sparks you have kindled–This you shall have from My hand: You shall lie down in torment.” – Isaiah 50:10-11 NKJV

Still There was Light

Years and years ago, back when I lived in Kentucky, God allowed a “Frankenstorm” to hit the coasts of my life. The storm was so big and lasted so long, literally nothing of my own making remained standing. FEMA couldn’t even help me.

At one point it was so bad; it was so dark, that I literally raised my fist to heaven, cursed my God, and begged Him to do what I was too afraid to do. I told Him I hated Him and wanted nothing more to do with Him. It was a bad, bad storm.

Yet….(isn’t that a great word?)…Yet, even in the middle of the darkness, there was a Flame that could not be quenched. Even as I cursed my Heavenly Father, inside I could hear a still, small Voice whispering, “I understand…I know…It’s OK…I’m here…Let it out…I still love you…I’m not going anywhere.”

If you could see me crying right now…it’s hard to see the computer screen.

The light of the righteous rejoiceth…

Husband, dad, pastor/preacher/teacher, musician, and Time Magazine's Person of The Year in 2006 (no joke!). Loves coffee (big time), good movies, and sarcastic humor. Currently pursuing a Doctorate of Ministry. Most importantly, a servant of the Lord Jesus Christ. All glory belongs to Him! END_OF_DOCUMENT_TOKEN_TO_BE_REPLACED
This entry was posted on Friday, August 30th, 2019 at 8:27 am and tagged with devotional, Florida, hope, Maine, Sandy, Storm, Superstorm and posted in Faithfulness, Mercy, Peace, The Righteous, The Wicked, Uncategorized. You can follow any responses to this entry through the RSS 2.0 feed.
« “Everybody’s Got Problems”
My Pride Says I’m Right »