The spirit of man is the candle of the Lord, searching all the inward parts of the belly.

I have long been fascinated by flashlights, or torches, as we call them in the UK. One of the earliest I owned was shaped like a gun. To make the torch work you simply pulled the trigger. That torch didn’t last long, it was cheap and my friend’s sister broke it. I was heart broken at the time, but since then I have been on a quest for brighter and better torches. The latest LED torches are currently meeting my needs! 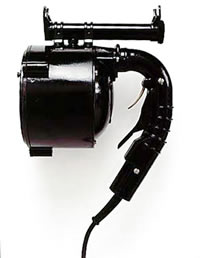 We had some fairly powerful torches when I was at sea – they were important emergency equipment, but none were as bright as the Aldis lamp we had on the bridge for the purpose of signaling. The Aldis lamp could light up pretty much anything, but it was intended for sending messages by Morse code over long distances. I remember a third mate on one ship standing outside the wheelhouse and shining an Aldis lamp into the jungle while we were anchored in the River Orinoco in Venezuela. He had hoped to spot some monkeys in the trees. All he actually achieved was to become a focal point for every hungry insect in the vicinity.

Just like the third mate got more than he expected when he shone a bright light into the jungle, so God’s light exposes more than we expect or wish it to when He penetrates our human spirit. Stuff we thought we had hidden away is suddenly exposed for all to see. But God doesn’t want everyone to see all our hidden secrets. He wants us to see them, recognize them, and surrender them to Him. Then He can deal with them so that when His light shines in us it also shines around us, illuminating His beauty in us and attracting others to Him.

Neither do people light a lamp and put it under a bowl. Instead they put it on its stand, and it gives light to everyone in the house. Matthew 5:15 (NIV)

David: Half Scot, grew up in Guernsey and the UK. Lives in one of the most rural counties of the UK not far from the Welsh border. Former Merchant Navy officer and hydrographic surveyor. Self-employed risk management consultant from 1992 travelling globally to carry out risk and security audits, plus some loss adjusting. Now retired. Father of Nick who encouraged David to start blogging. Married to Marilyn for 40+ years. Four other children in addition to Nick. Nine grandchildren. END_OF_DOCUMENT_TOKEN_TO_BE_REPLACED
This entry was posted on Tuesday, December 8th, 2020 at 6:00 am and tagged with Aldis lamp, flashlights, Light, torches and posted in Uncategorized. You can follow any responses to this entry through the RSS 2.0 feed.
« Human Resources
Leadership Advice »