“The horse [is] prepared against the day of battle: but safety [is] of the LORD.” 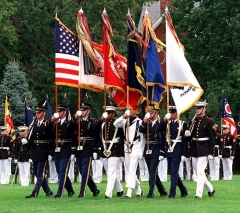 As an American, I benefit from the protection of the greatest military fighting force in the world. Some may differ with my assessment, but no invaders have yet to destroy us. No army, air force, or navy has near the combined resources which are at our disposal. If it was our desire as a nation, any country harboring enemy combatants could cease to exist in less than 24 hours.

America is still, despite it’s flaws, despite it’s leadership, a “giant” to be reckoned with. She is not to be underestimated or trifled with. Though she may be in moral slumber, as Admiral Isoroku Yamamoto found out the hard way, she can be “awakened.”

I am an American Soldier.
I am a Warrior and a member of a team. I serve the people of the United States and live the Army Values.
I will always place the mission first.
I will never accept defeat.
I will never quit.
I will never leave a fallen comrade.
I am disciplined, physically and mentally tough, trained and proficient in my warrior tasks and drills. I always maintain my arms, my equipment and myself.
I am an expert and I am a professional.
I stand ready to deploy, engage, and destroy the enemies of the United States of America in close combat.
I am a guardian of freedom and the American way of life.
I am an American Soldier.

Nevertheless, America is only a nation of men – flawed men, at that. And despite the power of her military, the greatest kingdoms have always fallen from within.

America, the country who’s motto is “In God We Trust,” has not only forgotten God, but has leadership in her military who is actively seeking to remove any vestige of His name. America’s leaders need to remember that God not only changes the seasons and times, but he “removeth kings, and setteth up kings” (Daniel 2:21).

One of America’s Founding Fathers, Benjamin Franklin, declared to those drafting our Constitution…

“I have lived, Sir, a long time, and the longer I live, the more convincing proofs I see of this truth- that God governs in the affairs of men. And if a sparrow cannot fall to the ground without his notice, is it probable that an empire can rise without his aid?”

What has changed? We have tanks and armored troop carriers instead of horses, but are we any more safe without the Lord? NO!

The LORD is my rock and my fortress and my deliverer; My God, my strength, in whom I will trust; My shield and the horn of my salvation, my stronghold. I will call upon the LORD, [who is worthy] to be praised; So shall I be saved from my enemies. – Psalm 18:2-3 NKJV

Oh, America! Remember the God of your youth! Especially during this election season!

Husband, dad, pastor, artist, and musician. Time Magazine's Person of the Year in 2006 (no joke!). Loves coffee (big time), good movies, and sarcastic humor. Holds a Doctorate in Ministry. Most importantly, a servant of the Lord Jesus Christ. All glory belongs to Him! Matthew 5:16 END_OF_DOCUMENT_TOKEN_TO_BE_REPLACED
This entry was posted on Tuesday, August 2nd, 2016 at 6:30 am and tagged with Benjamin Franklin, devotionals, I Am an American Soldier, proverbs, true safety, U.S. Soldier's Creed, United States, United States of America and posted in Armour and Weaponry, Peace, Trust the Lord. You can follow any responses to this entry through the RSS 2.0 feed.
« Counsel God?
A Good Name »