The full soul loatheth an honeycomb; but to the hungry soul every bitter thing is sweet.

A person who is full refuses honey, but even bitter food tastes sweet to the hungry. (NLT)

The longest I have been without food was during a hospital stay for abdominal surgery. I wasn’t allowed to eat before going into hospital, and it was about eight days after the surgery before I was allowed to look at food again. I don’t remember that I was particularly hungry at this time, as I had been connected continually to a drip since the surgery and received sustenance in this way. The first meal I was given was soup followed by ice cream. I often tell people that the ice cream was warmer than the soup! Did I enjoy this meal? No! I guess if I had been really hungry then anything would have tasted good, even bitter food or warm ice cream. 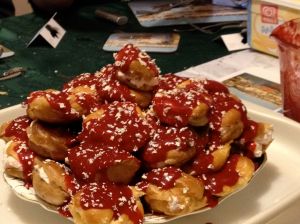 Despite the hospital experience I don’t think I have ever experienced true hunger. I am fortunate to live in a part of the world where there is more than enough to eat. As I get older I find I eat less, and while often tempted, I am usually unable to find space for dessert after a good meal in a restaurant. This is difficult as I have a sweet tooth and I love dessert.

The challenge that this proverb throws at me is not really one of absence of food or a desire for dessert, but a question about my hunger for God. Is it possible to feed on God so much that it is impossible to consume any more of Him? Is it possible to be so filled with the Holy Spirit that I can barely stand? I think back to an incident in the Temple when two people had their hunger for God satisfied. Simeon was described as a righteous and devout man who was eagerly waiting for the Messiah (Luke 2:24). When he set eyes on Jesus he took the Child in his arms and praised God.

Anna, a prophet was standing nearby earwigging. A widow of eighty-four, Anna had remained in the Temple for many years worshipping God day and night with fasting and prayer. Her delight in Jesus was so great that she couldn’t stop talking about Him to everyone she encountered. Anna fasted but her hunger was not for food but for more of God. Simeon had waited his whole life for his hunger for Jesus to be satisfied, having been promised by the Holy Spirit that he would not die until He had set eyes on the Messiah. While we don’t have to wait for Jesus, the irony is that Jesus spends most of His time waiting for us to recognize our hunger and come to feed from Him. As I write these words I am overwhelmed by a sudden and urgent hunger that food will never satisfy. I need more of Jesus.

David: Half Scot, grew up in Guernsey and the UK. Lives in one of the most rural counties of the UK not far from the Welsh border. Former Merchant Navy officer and hydrographic surveyor. Self-employed risk management consultant from 1992 travelling globally to carry out risk and security audits, plus some loss adjusting. Now retired. Father of Nick who encouraged David to start blogging. Married to Marilyn for 40+ years. Four other children in addition to Nick. Nine grandchildren. END_OF_DOCUMENT_TOKEN_TO_BE_REPLACED
This entry was posted on Monday, June 5th, 2017 at 7:00 am and tagged with Dessert, Food, Hunger, Pudding and posted in food. You can follow any responses to this entry through the RSS 2.0 feed.
« Tune In to “Proverbial Thought”
Free Recordings Available »