“In the transgression of an evil man there is a snare: but the righteous doth sing and rejoice.” (KJV).

“Evil people are trapped by sin, but the righteous escape, shouting for joy.” (NLT).

Of Monkeys and Bananas:

When I was a youth pastor in Surrey, BC, I hosted True Love Waits teenage abstinence seminars for young people. Over the course of several years (from 1999-2004), we saw around 900 teenagers and young adults make pledges to remain sexually abstinent until marriage. In one such event, we invited Dave Koop, the lead pastor of Coastal Church in Vancouver, to speak at the opening session of the weekend event. To this day, I’ve never forgotten this powerful story.

In Africa, they have an interesting method of capturing monkeys in their jungles. They will take a container with a narrow opening in it, and place a banana (or some other sort of sweet-smelling fruit or nuts), and place it in the bottom of the container. Then the hunters hide in the bushes and wait for the monkeys. When the monkey comes to check out the container, he reaches in his little monkey hands and grasps the banana. However, when he goes to take out his hand, which is now closed in a fist around the fruit, he can no longer get it out of the container. Out jump the hunters and club the monkey to death.

The sad part of the story is that at any time, the monkey could drop the banana and take its hand out of the container, but it won’t. And the result is it is trapped. And then it dies.This is Solomon’s Proverb in action: “Evil people are trapped by sin.” Sin is a trap that is very difficult to get out of – on our own.

The Joy of Freedom:

Thank God though for the second part of that verse: “but the righteous escape, shouting for joy!” Even though sin is a trap that is difficult for us to escape, the Bible teaches us that Jesus came to save His people from their sins. In the very first sermon Jesus ever preached, He quoted the prophet Isaiah and said, “The Spirit of the Lord is upon Me, because He has anointed Me to preach the gospel to the poor; He has sent Me to heal the brokenhearted, to proclaim liberty to the captives.” (Luke 4:18). Jesus wants to set us free – not only from the guilt and penalty of sin, but also from the power of sin.

My favourite Christian author, the 19th century Charles Spurgeon, the Prince of Preachers, told this story that illustrates today’s Proverb well: I remember my old friend, Dr. Alexander Fletcher say to the children that when men came out of prison, they praised him who had set them free. He said that he was going down the Old Bailey one day and he saw a boy standing on his head, turning cartwheels, dancing and jumping about in all manner of ways, and he said to the boy, “What are you doing? You seem to be tremendously happy.” And the boy replied, “Ah, old gentleman, if you had been locked up six months and had just got out, you would be happy, too!”

If you are a Christian, then Jesus has set you free from the trap of sin. Our response? Rejoice! 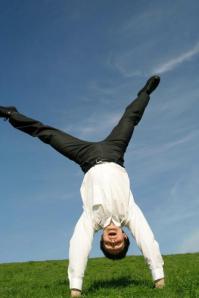 This entry was posted on Wednesday, September 6th, 2017 at 8:00 am and tagged with Bible, faith, freedom, God, Jesus, Joy, proverbs, Religion and Spirituality, Wisdom and posted in The Righteous, The Wicked. You can follow any responses to this entry through the RSS 2.0 feed.
« Doing a Good Job
Rest Will Come…One Day »