“Where no counsel is, the people fall: but in the multitude of counselors there is safety.”

This is a bit of a strange one. The first part is easy to understand: Without good advice there are going to be problems. This applies on an individual level, but also to churches, companies, local and national government. Newspaper and television reporters from around the world have no shortage of subject matter when it comes to the failure of businesses and governments where there is no counsel or poor counsel.

The second part of the Proverb suggests that having many counselors is good. That doesn’t fit with a more modern proverb: ‘Too many cooks spoil the broth.’ I can relate to that. As a young second officer in the Merchant Navy my experience was gained mostly on cargo ships. Then in 1978 I joined a tanker. The only cargo equipment on this vessel was a couple of derricks for handling hoses and the gangway. Our Hong Kong deck crew had gained most of their experience on tankers, as had the other deck officers. Nobody had a clue how to use the cargo gear. 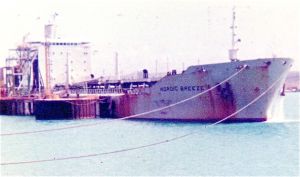 The first time I watched the crew trying to position the gangway between the ship and the jetty they came close to demolishing a shore installation. I did not need to speak Cantonese to ascertain the problem. One man, the bosun, should have been giving instructions. The problem was that every man in the deck crew thought he was the bosun, meaning that opinions and advice were flowing from all quarters. At the next port I took charge, issuing one set of instructions and positioning men and ropes where they needed to be. The crew were stunned at the ease with which we positioned the gangway. In this case only one counselor was needed to ensure safety.

I’m sure you can see where this is going. Sometimes we get swamped with opinions and instructions and supposedly good advice. It also comes from all quarters, especially in church. Every person is a bosun. Or so they think. Jesus knew what would happen when He left Earth to sit at the right hand of the Father. He knew that every person would have an opinion and want to give counsel. He knew that everyone would want to be the bosun. So He took action.

“And I will ask the Father, and he will give you another counselor to be with you forever – the Spirit of truth. The world cannot accept him, because it neither sees him nor knows him. But you know him, for he lives with you and will be in you.” John 14:16-17 (NIV)

There may be times when it is right to take earthly counsel, but too often we forget that there is another Counselor. Who are you listening to?

David: Half Scot, grew up in Guernsey and the UK. Lives in one of the most rural counties of the UK not far from the Welsh border. Father of Nick who encouraged David to start blogging. Married to Marilyn for 40+ years. Four other children in addition to Nick. Eight grandchildren. Former Merchant Navy officer now getting closer and closer to retirement. END_OF_DOCUMENT_TOKEN_TO_BE_REPLACED
This entry was posted on Monday, July 8th, 2019 at 7:40 am and tagged with advice, advisors, bosun, Good counsel, tanker and posted in Paths of Life, Uncategorized, Value and Worth, Warnings, Wisdom. You can follow any responses to this entry through the RSS 2.0 feed.
« What’s In Your Heart?
Just Say “NO!” »