I Did It My Way

Speak not in the ears of a fool: for he will despise the wisdom of thy words.

All of us fall into ‘the fool who doesn’t listen’ category from time to time. One example that comes to mind is of Martin, a fellow cadet on my second trip to sea. Martin was a first tripper and all seafarers are aware that first trippers know nothing. Hence the saying ‘only first trippers and seagulls sit on a ship’s rails!’ 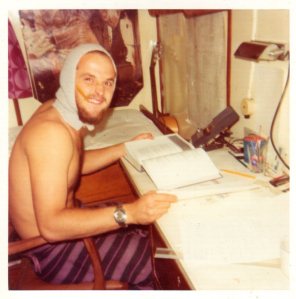 Martin was an intelligent but unconventional young man, with an unusual upbringing. This included time spent growing up as a missionary kid out in the bush in Kenya, followed by a boarding school education back in England, while his parents continued to serve in Africa. We hit it off straight away. Martin was a couple of years older than me, but theoretically I was the senior cadet having served longer at sea. Friendship and length of sea time did not mean that Martin listened to me. In fact, his failure to listen meant that we both regularly got into trouble with the chief officer (otherwise known as the mate) and even the captain on occasions. Three incidents in particular spring to mind:

1. When we were told to paint the emergency fire pump Martin thought it would look better in rainbow colors. I told him the mate would not like it. Martin didn’t listen and we ended up repainting the fire pump. In our own time.

2. When given the task of repairing the canvas lifeboat covers Martin soon got tired of stitching on the patches. He suggested glue. I told him the mate would not like it. He didn’t. He made us stitch around the patches we had glued. In our own time.

3. When presented with numerous flags to wash by hand Martin felt that a spot of bleach might help restore the flags to their former glory. I took a stand on this one and told him that bleach would damage the flags. Martin didn’t listen. I didn’t see him add the bleach but I sure as heck saw the results. So did the captain when we tried to sneak the damaged flags back to the wheelhouse. I still remember the explosion. “YOU DID WHAT! YOU WASHED THE FLAGS IN BLEACH?!!!” The captain’s cap didn’t quite leave his head, but as a small man he was prone to jumping up and down a lot when he lost his temper.

Martin had a knack of thinking up shortcuts. No amount of advice would deter him from taking action that others were convinced was foolish. I guess the best defense that Martin had was his youth, but many of us left youth behind many years ago yet still fail to heed a voice of wisdom, or worse the voice of God. It is no excuse to say we didn’t hear, we didn’t understand, or we thought that our way was better. When God speaks we need to listen. Carefully. Then we need to do what He says, when He says, and how He says.

David: Half Scot, grew up in Guernsey and the UK. Lives in one of the most rural counties of the UK not far from the Welsh border. Former Merchant Navy officer and hydrographic surveyor. Self-employed risk management consultant from 1992 travelling globally to carry out risk and security audits, plus some loss adjusting. Now retired. Father of Nick who encouraged David to start blogging. Married to Marilyn for 40+ years. Four other children in addition to Nick. Nine grandchildren. END_OF_DOCUMENT_TOKEN_TO_BE_REPLACED
This entry was posted on Friday, October 7th, 2016 at 8:17 am and tagged with Flags, Listening, Seagulls and posted in advice, counsel, Fools, Friendship, Wisdom, Work. You can follow any responses to this entry through the RSS 2.0 feed.
« Nauseous Hosts
Don’t Move the Stones »