A Fool and His “Switch”

“In the mouth of the foolish is a rod of pride: but the lips of the wise shall preserve them.”

“A fool’s talk brings a rod to his back, but the lips of the wise protect them.” – NIV

If the typical Child Protective Services agent of today had been around when I was a wee heathen, my parents, grandparents, and great-grandparents would have been hauled off to jail. My parents, especially my paternal grandmother, would have wound up on the front page of the newspaper. They would have made the evening news on television. The story would have read something like this… 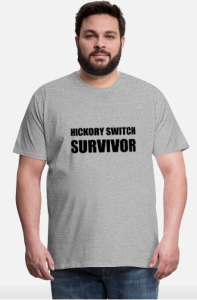 Click on the picture. I’m sure the company won’t mind me doing a little advertising in return for using their t-shirt pic 😉

Left-wing, pot-smoking, tree-hugging, liberal, hippie neighbors who somehow snuck into the neighborhood heard little Anthony screaming bloody murder and went to investigate. They reported seeing darling little Anthony bent over his grandmother’s knee as she mercilessly assaulted him with the large tree branch previously growing in the front yard.

According to the angelic little Anthony, his grandmother, upon hearing him backtalk her, told him to exit the house in order to retrieve said “switch.” When he didn’t return with the prescribed tool of abuse, Mrs. Baker sought him out, hewed down her own tree, then preceded to “wear him out.“

Yes, when I was a child, you did not talk disrespectfully to your grandmother. If your mouth was bad enough you might even be made to pick your own tool of discipline – and it was wise to pick a big enough switch the first time.

Whenever I was about to get into serious trouble, my dad used to say, “Son, you’re cruising for a bruising.” Whenever I talked back (disrespectfully) to my parents, I was in danger of seeing stars (without a telescope). Therefore, it did not take long for me to learn how to control my tongue.

According to this proverb, though, a fool is pictured as having a rod (switch, branch, vine) growing out of his mouth. Because of his pride, the fool never learns from the consequences of his words. Every thing he says seems to come back and beat him.

The one who knows how to keep his mouth shut, however, is much more likely to be able to sit down without pain. At least that’s the way it used to be.

A Note for the Shocked

Please don’t misunderstand today’s proverb, nor my attempt at humor. No one here, especially myself, would advocate abusing a child. Corporal punishment should be administered in love, not anger, and only as a last resort.

The problem is that much of our society promotes “the mouth of the foolish.” Remember, “God is not mocked,” so the fool that runs off at the mouth today is still in danger of suffering from his words – one way or another.

Husband, dad, pastor, artist, and musician. Time Magazine's Person of the Year in 2006 (no joke!). Loves coffee (big time), good movies, and sarcastic humor. Holds a Doctorate in Ministry. Most importantly, a servant of the Lord Jesus Christ. All glory belongs to Him! Matthew 5:16 END_OF_DOCUMENT_TOKEN_TO_BE_REPLACED
This entry was posted on Wednesday, September 18th, 2019 at 6:00 am and tagged with Correction and Discipline, devotionals, parenting, proverbs and posted in advice, Fools, Parenting, pride/humility, Uncategorized. You can follow any responses to this entry through the RSS 2.0 feed.
« Two Roads
Clean Troughs »