“The words of a man’s mouth are as deep waters, and the wellspring of wisdom as a flowing brook.”

The deepest waters in our world are found in the Mariana Trench in the Pacific Ocean. The deepest point of the Mariana Trench is reported to be 6.831 miles below sea level. The trench has been explored during several scientific expeditions, but for most of us it is just a name on a map or chart, or an entry in Wikipedia. Despite the efforts of scientists the deepest parts of the ocean generally remain a mystery because of their inaccessibility. 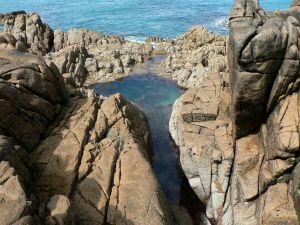 But even a rock pool is a different world. Life is different in the water. There are strange creatures and unusual colors. To reach the best and deepest pools it is necessary to scramble out across the rocks at low tide. This is something I did regularly as a child. Although my friends and I returned often to our favorite rock pools, they were never the same. Each new tide brought changes, trapping different creatures.

And so it is necessary to explore and go deep when searching for words to use in our daily encounters with other human beings, and also with God. We have to be careful with words. We have to be wise users of language. We need to develop a wellspring of wisdom as a resource on which we can draw every time we speak.

Avoid godless chatter, because those who indulge in it will become more and more ungodly. (2 Timothy 2:16 NIV)

And when you pray, do not keep on babbling like pagans, for they think they will be heard because of their many words. (Matthew 6:7 NIV)

David: Half Scot, grew up in Guernsey and the UK. Lives in one of the most rural counties of the UK not far from the Welsh border. Former Merchant Navy officer and hydrographic surveyor. Self-employed risk management consultant from 1992 travelling globally to carry out risk and security audits, plus some loss adjusting. Now retired. Father of Nick who encouraged David to start blogging. Married to Marilyn for 40+ years. Four other children in addition to Nick. Nine grandchildren. END_OF_DOCUMENT_TOKEN_TO_BE_REPLACED
This entry was posted on Saturday, February 8th, 2020 at 6:00 am and tagged with Pacific Ocean, proverbs, Water, Wisdom and posted in advice, conversation/speech, counsel, Warnings, Wisdom. You can follow any responses to this entry through the RSS 2.0 feed.
« Hiding in Hatred
Acquit or Convict? »