The Father In the Window

“[6] For at the window of my house I looked through my casement, [7] And beheld among the simple ones, I discerned among the youths, a young man void of understanding, [8] Passing through the street near her corner; and he went the way to her house, [9] In the twilight, in the evening, in the black and dark night:”

The Science of Sin 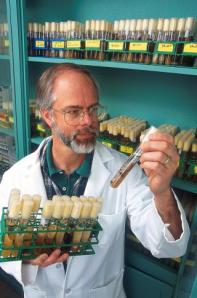 In the New Testament epistle of James, chapter 1, verses 14 & 15, the author outlines the process of someone falling into sin.  In that passage James the Just tells how it begins with an “evil desire” by which the individual is “dragged away and enticed”.  Once that desire is conceived, says James, “it gives birth to sin; and sin, when it is full-grown, gives birth to death”.

In a similar way, the Father (7:1) assumes the viewpoint of an intelligent observer of sin in today’s verses.  The Father watches from his window, not with voyeuristic delight, but as one who wants to see what lessons can be deduced from the sad spectacle in front of him.  Sin can be observed, studied, and understood.  There are definable, universal patterns at work in the fallen human nature leading to sin, and the wise son can and should learn from the costly mistakes of others.  If you skim on through the rest of the chapter, you see that ultimately the foolish youth being observed is “dragged away and enticed” by the adulteress (v. 21).  How did this tragic moral failure occur?  Proverbs 7:6-9 provides a case study in a young man taking three downward steps into the sin of adultery.

The young man is described as a “simple one” and “void of understanding”.  Here is a youth who feels no need for the blessings of moral instruction.   Were you to ask him if he thinks of himself as “void of understanding,” he would flatly deny it.  “No,” he would say, “I know how life works; I know what’s best for me; and I know how to achieve my goals.”  Were you to offer him counsel, he would scoff at the seriousness of your concerns.

Step 2:  “After All, I Can Come Close to the Sin Without Sinning.”

Notice how the young man just happens to be walking in the neighborhood of the adulteress.  As he is “passing through the street near her corner” (v. 8).  He tells himself that he’s not walking anywhere in particular; no, he’s just out for an evening stroll.  Oh, how deceptive is the human heart!  Readers, how many times have we wandered into sin’s neighborhood, with one side of our mind rationalizing that we are fully under control and will not fall this time; all the while knowing deep inside exactly where we’re headed, and what we intend to do when we get there.

Step 3:  “I Can Manage This Sin and its Consequences.”

By the second half of verse 8, the foolish youth is no longer kidding himself.  Tonight, he’s going to the adulteress’s house.  He’s crossed the line of no return.  Does he recognize sin for what it is?  Of course he does.  He’s bears the Creator’s image, and his conscience screams for him to turn around.  But now, he is no longer merely entertaining the notion of sin; rather, he’s determined that he’s going into the situation full steam ahead, because, he believes, he can manage the sin and its consequences.  The lady’s husband?  He’s out of town (v. 19).  Witnesses to the immorality?  There’s no one watching, thinks the youth.

Ah, but here he’s wrong.  There is one watching – the Father in the window!

The Watcher in the Window 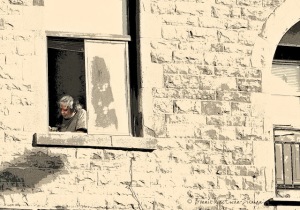 Is there a sense in which the narrator of the passage (the Father in the window) is a type of Jesus Christ?  If we take the narrator to be Solomon (and we have every reason to do so), and Solomon is a son of David, could Solomon here in a particular way be pointing us to David’s Greater Son, Jesus Christ?

I tend to think so.  King Jesus allows us to make our own choices.  It’s difficult for us to get our puny minds around, but the Bible teaches both that Jesus is our Sovereign King with all authority at his disposal (Matthew 28:18), and yet we make our choices and we act freely, without coercion from God.  Dear reader, perhaps you are an adulterer or adulteress; then again, perhaps your sin of choice is of a different variety—gossip, slander, hatred, greed, and the like.  Whatever your sin is, Jesus knows exactly what’s going on.  He doesn’t coerce you into sin (James 1:13); no, you have chosen to walk those downward steps all on your own.  But neither does he typically leap in and interfere with the situation.  For many years Proverbs 7 troubled me:  Why doesn’t the observer in the window stop the foolish youth from rushing to destruction?  It has only been as I’ve come to recognize how many thousands of times Christ has watched me taking those downward steps – 1, 2, 3 – all the while gazing at me with love and sadness, that I’ve begun to understand.

The good news is that the Watcher in the Window DID come down, not heroically to stop a foolish youth from his own stupidity, but to bear the guilt and shame of that youth for his sin and stupidity.  On Calvary’s Cross, Jesus died for all of our sin, guilt, and shame.  Yes, even for that sin that has just come to your mind, the one that you think nobody knows about, the one that makes you blush or break out in a cold sweat.  He did not come down to condemn the world, but that through Him the world might be saved (John 3:17).  When you place faith in Jesus Christ, trusting in Him alone for salvation and turning away from sin, the most curious thing then begins to happen.  You begin to change from the inside out.  You find that you are still free to do what you want, but your “wants” begin to change.  You no longer “want” to sneak down the dark alley and knock on sin’s door.  You no longer “want” to eat another bite of the forbidden fruit.  What you want, is to be in fellowship with Jesus, the one who came down from heaven, and lived and died for you.

In tomorrow’s posting, we return to the sad saga of the foolish young man and the adulteress.  Hope to see you then!

Father God, forgive this writer the many times he has walked those familiar steps outlined above.  Be merciful and gracious to us, Father, for the sake of your dear Son Jesus Christ, our Lord.  Transform us deep within, that we might truly hate sin and love righteousness.  And may we never forget that it is not our righteousness, but the imputed righteousness of Jesus Christ, by which we have this relationship with you.  In Jesus’ name, Amen.

Husband, father, and pastor of the Evangelical Presbyterian Church, serving at Lookout Valley Presbyterian Church, Chattanooga TN, since 2002. Grady's life verse is Habakkuk 2:14, "For the earth will be filled with the knowledge of the glory of the LORD, as the waters cover the sea." Amen! END_OF_DOCUMENT_TOKEN_TO_BE_REPLACED
This entry was posted on Wednesday, May 15th, 2019 at 6:00 am and tagged with Bible, Book of Proverbs, Gospel of Matthew, James, Solomon and posted in advice, counsel, desire. You can follow any responses to this entry through the RSS 2.0 feed.
« Write It Down
He Met a Harlot »